Some time ago I read the review of a documentary that got me curious. Its title was enticing: Conxita Badia no existeix (Conxita Badia does not exist). The name did ring a bell, but was I remembering someone who did not exist?

It turned out to be a film about soprano Conxita Badia (1897-1975) made by her great-granddaughter Eulàlia Domènech. She had found out that very few audios and no videos of Badia’s performances have been preserved. This lack of remnants gave her the feeling that she had to inform the general public about her talented relative who was once universally recognized as an accomplished lied singer.

In the interviews shown in the documentary, experts and people who have known her explain that Conxita Badia was the perfect lied singer and an inspiration for many composers and musicians. In fact, quite a number of them seems to owe their fame to her.

Apart from her beautiful soprano voice, Conxita Badia allegedly knew how to communicate to the public the action and emotion of the poem set to music. Her sense of timing, rhythm, interval and phrasing were flawless, while her facial expression and body language supported the meaning of the song. Critics especially praise her diction stressing the clear and accurate presentation of each and every line.

According to the film, in her time the vocalist was famous and performed in the best concert halls in Europe and North and South America. This means that many people around the world must have heard her sing. Yet she hardly left any trace. So here is what I have come to know about her.

Beginnings of her career

Conxita is born in Barcelona on 14 November 1897 in a middle class family. From an early age she gets singing lessons from a local teacher who is the first to recognize her talent. Soon he recommends her parents to take her to the Acadèmia Granados where she meets the pianist and composer Enrique Granados who is immediately impressed when he hears the 7-year old girl singing during her solfège classes.

Only four years later she is giving concerts, already a great lied singer. Although Conxita also turns out to be an accomplished piano player, Granados recommends her to dedicate herself to vocal music.

When she is 16 years old, representatives of the Wagner Association are enchanted by her interpretation of Solveig’s Song by Edvard Grieg. They invite her to play the role of flower maiden at the premiere in the Palau de la Música Catalana of the concert version of Wagner’s Parsifal. Her father thinks she is too young, but the president of the Association asks him: ‘Is she not exactly that, a maiden and a flower?’ In the end Conxita’s father gives in and so her professional debut takes place in 1913 in the iconic concert hall singing in an opera commemorating the centenary of the composer’s birth.

Over the years Conxita Badia and Enric Granados stay in close contact, for him she is almost like a daughter. He accompanies her on the piano during her concerts all over Spain, where Conxita also interprets his songs, like the Canciones Amatorias, two of which he had dedicated to her, and the Tonadillas. She is his ‘vocal instrument’ and each time he wants her to sing his songs he sends her the message Vine tu i les cançons (Come, you and your songs).

Their close cooperation comes to an abrupt end in 1916 when Granados and his wife are drowned; returning from a tour through the U.S. on board the Sussex, the vessel is torpedoed by a German U-boat on its way across the English Channel.

Conxita is devastated. Composers and musicians at home and abroad consider her to be his heir, like the pianist Alícia de Larrocha who writes: ‘You are the nearest that remains of our Granados’. His music becomes a regular feature of her repertoire; fifty years later she is the protagonist of a concert in the composer’s honour in the Hotel Manila (Barcelona), together with other artists, like Yehudi Menuhin.

Throughout the first decades of the 20th century Barcelona and Catalonia enjoy a rich cultural life in all kinds of disciplines. For example, painter Salvador Dalí causes a sensation when he exhibits his works in the capital, and poet and playwright Federico García Lorca opens his play Mariana Pineda, with stage settings by Dalí, to great acclaim in Barcelona in 1927.

The buzzing region also attracts musicians and composers from other parts of Spain who feel inspired by its creative possibilities. So Conxita and the rest of the Catalan artistic world enthusiastically welcome composer Manuel de Falla; for the singer this is the beginning of a very productive relationship which will last till De Falla’s death.

In the meantime Conxita, as the great lieder singer, has become the inseparable musical partner of Pau Casals, her second Maestro, who is inspired by her interpretations. He even says ‘When I compose for a female voice, I always have Conxita’s voice in mind.’ Together they give more than thirty concerts with the Orchestra Pau Casals, the first professional symphonic orchestra of Barcelona.

During the general rehearsal of one of these concerts they hear the news of the revolt of General Franco. Casals urges all the artists present to sing the Ode to Joy of Beethoven‘s Ninth Symphony, because it may be the last time they can do this together. It is the 17th July 1936, the beginning of the Spanish Civil War. An upsetting and uncertain period has arrived.

When one of her close friends is murdered, Conxita goes into exile and leaves for France, just like Pau Casals and many other cultural and political personalities.

Paris, Conxita’s new home, is the starting point of many concerts all over Europe where critics are unanimous in praising her skills. But when on this continent another war is starting, Conxita accepts the proposal of some South American managers and goes into exile a second time, first in Brazil, later in Argentina.

There she finds a colony of refugees from her home country and befriends many important cultural figures, like philosopher José Ortega y Gasset, poet Rafael Alberti and actress Margarida Xirgu.

During her many performances in the main concert halls of Brazil, Uruguay and Argentina and on the radio, she not only sings Italian and German lieder, but also work written by contemporary Brazilian and Argentinian composers (Heitor Villa-Lobos dedicates to her the song Dinga-Donga, and Alberto Ginastera his Las horas de una estancia) as well as Spanish and Catalan composers, like Frederic Mompou and Manuel de Falla.

The latter had already heard Conxita sing in Barcelona and Paris where her art had made a mark on him. His arrival in Buenos Aires as an exile, just like the singer, means continuing a very productive relationship. She interpretes his whole repertoire and becomes his favorite singer. When they meet at his house, he always opens the piano and accompanies her while she sings. But often he just asks her to play the piano, because she reminds him very much of Enric Granados.

Nine years have passed since Conxita has left Catalonia. She has known many successes and is adored by an ever growing public. An interesting proposal for a series of concerts in the U.S.A. is waiting for an answer. In spite of the huge success in South America, Conxita decides to return to Catalonia in 1946, not in the least because she fears that her daughters will loose contact with their roots. She leaves behind a mourning public and critics who have praised and admired her during her stay. 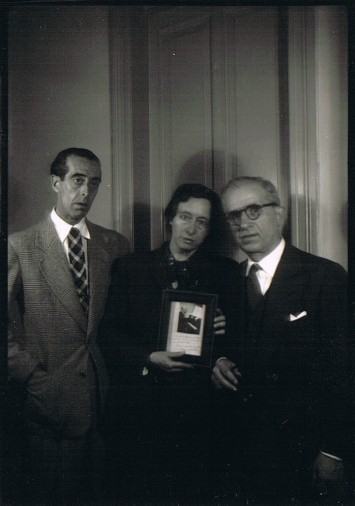 When she has to say farewell to her teacher and regular accompanist on the piano Manuel de Falla, she passes through some difficult moments. His parting words are Goodbye, Conxita. Till we meet again. And if not, till eternity (see above for photo and farewell note). Two days after Conxita’s sailing he dies.

In November 1947 in an altered Barcelona she finally sings in the Palau de la Música the song cycle La rosa als llavis (The rose on the lips) by Eduard Toldrà based on a poem of Joan Salvat-Papasseit, a work that had never been performed due to the outbreak of the Spanish civil war: the composer had not wanted to have it premiered without Conxita to whom the work is dedicated. The long and arduous applause shows that the Catalan public had not forgotten her.

This meaning was clearly understood by the Catalan public in the Palau de la Música and interpreted according to the circumstances. That is why the concert contributed to the revival of national (read: Catalan) feelings as well as the Catalan language after the repression of the Civil War.

Over the years Conxita takes part in all the important cultural events in the whole country, like the concerts in the ‘Jardí dels Tarongers’ in Pedralbes (Barcelona).

Some of the memorable moments are the first performance in 1956 of Doce canciones españolas composed by Joaquín Rodrigo who also accompanies her on the piano, and the hommage to Enric Granados in 1966 in the luxury Hotel Manila, which venue then becomes the cultural reference of the Catalan capital. Other famous pianists are also eager to play during her concerts, such as her great friend Alícia de Larrocha.

Now and then Conxita travels to Prada de Conflent (France) to meet with her friend and maestro Pau Casals who lives there in exile and would never return to Catalonia. Their first meeting is very emotional.

During Franco’s dictatorship it was virtually impossible to travel abroad. Then one day in 1950 Conxita succeeds in obtaining an authorization for one day to visit the man with whom she had been corresponding assiduously. When she arrives at his house, the head servant tells her that unfortunately Casals is resting and cannot receive her. Then she starts to sing El cant dels ocells, the song that he had made famous outside Catalonia playing it on his cello.

After 1939, the end of the Spanish Civil War, he used to begin each concert with this song that has become a symbol of the region. When Casals hears her voice, he shouts from upstairs ‘Conxita, Conxita!‘ and she is admitted after all.

Conxita Badia keeps performing for many years; even at the age of seventy her voice and art continue to enchant composers, critics and public alike. For this she receives a great number of honours and decorations awarded by Catalonian as well as Spanish institutions.

Over the next few weeks some short posts related to the singer will be published. So come and have a look now and then.

All the photos of Conxita Badia are published by courtesy of Eulàlia Domènech i Bonet.

One thought on “Conxita Badia, singer”