“Carme Bravo Roy (Gironella, Berguedà, October 24, 1919 – Barcelona, April 29, 2007) was a Catalan pianist. She completed her piano studies at the Municipal Conservatory of Barcelona where she received various awards and qualifications including a scholarship to study in Paris. In 1950 she moved to France where she studied under Madga Tagliaferro and Lazare Lévy“.

This is the beginning of a new page on the English Wikipedia dedicated to Carme Bravo who was a celebrated concert pianist and pedagogue, but by many only known as the wife of Catalan composer Frederic Mompou.

For more information with links to her discography go to this page written by Kayla Portugal, graduated pianist from the Escola Superior de Música.

Apart from being a gifted performer, Conxita Badia was an inspiring teacher. Music students from all over the world came to Barcelona just for her. Among them was the Catalan Montserrat Caballé who became a singer whose talent is recognized worldwide.

Conxita also travelled around Europe and the America’s to give singing lessons, for example the summer courses in the Mozarteum in Salzburg and the prestigious yearly courses in Santiago de Compostela.

Conxita and a group of students from all over the world

To honour Conxita Badia one of the auditoriums of the Conservatory of Barcelona and another in the Civic Centre of Sarrià (Barcelona) are named after her, as well as a square in Barcelona (Sant Martí) and two streets in Sant Pol de Mar (Maresme) and Castellbisball (Vallès Occidental). The Universidad Nacional Autónoma de México created the Conxita Badia Chair.

In case you want to know more about her, go to the page ‘Conxita Badia, singer‘. Photos: @Fons Conxita Badia, Biblioteca de Catalunya.

Rapper Joina can be seen and heard in this video El món és seu (The World is Theirs). In this song she claims the street and denounces sexual harassment.

Imagine it is the 1960s and you are Joana Biarnés, a woman photojournalist passionate about your work, but it is a man’s world and you are not taken seriously. So no newspaper director is considering to offer you a contract, although they say they appreciate your work. Like Emilio Romero of the mythical daily Pueblo, one of the leading publications of the Franco era.

But she is a fighter and is aiming high. When in July 1965 the Beatles visit Madrid and Barcelona for a short tour, she grabs this opportunity to prove all the directors wrong. The Beatlemania is at its very peak, also in Spain, and photos of the band are in great demand. The musicians had announced they only want to do a press conference in Madrid and no photo session afterwards.

Joana’s father has always encouraged her to try to capture the photo of all photos, that one photo to stand out from the crowd. This standard press conference obviously does not yield unique pictures and she has to resort to another scheme. Thanks to her good relationship with the PR man of Iberia she gets a seat in the plane that transports the Beatles to Barcelona. Once inside she sets up her gear in the toilet and takes a series of pictures through the crack of the half-opened folding door where she is caught red-handed. Below you see some of the photos. 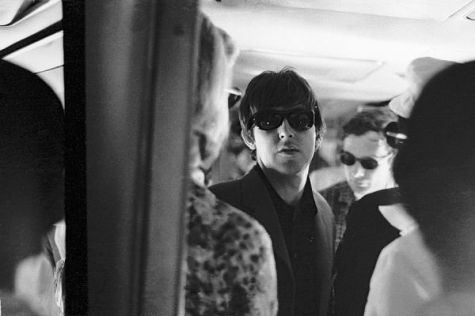 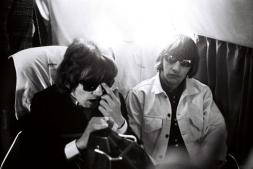