During the Internationale Filmfestspiele in Berlin photographer and film maker Irene Moray (Barcelona, 1992) has shown her second short film Suc de síndria (Watermelon Juice) taking part in its Shorts Competition. At the end of the festival the jury granted it a nomination for the European Film Awards 2019 which will be held on December 7 in the  German’s capital.

The film is an optimistic story about survival after sexual abuse, a problem that in Irene’s opinion is ‘scandalously common’ and not discussed enough. ‘These wounds are often represented as a trauma, but there are no models available that talk of healing’,  the director complains. Therefore she decided to make a film full of hope in which the main character rises above this impactful event through love.

In this film, produced by Distinto Films, Irene Moray tells the story of Bàrbara (Elena Martín) and Pol (Max Grosse) who meet during their holidays. In the middle of nature (like the reservoir of Baells, Berguedà) and surrounded by their friends, they find a quiet place in which they can savour their intimacy. With his help Bàrbara slowly cures old wounds inflicted during a period of sexual abuse. In this way she regains confidence and once more learns to enjoy her sexuality. 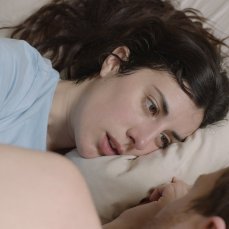 Irene explains that usually ‘we do not have models or references that talk of healing, but loving yourself, an emotional gesture, compassion, respect, all these things will enable you to survive. And if the other person reciprocates this feeling, he or she can stand by you in the proces’.