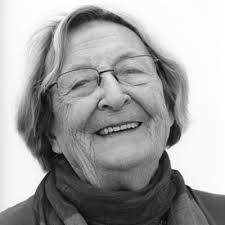 Today, 1st February, is the one hundred years ago that Montserrat Abelló was born, a prolific poet full of energy who died in 2014 at the age of 96.

‘Abelló’s poetry, which has been collected into one volume entitled At the Heart of the Words. Collected poems 1963-2002, for which she received the 2003 Lletra d’Or Prize, is notable for a voice that is at once firm and intimate, and for its overall consistency and unity of direction. Although, when Abelló began to write, she was influenced by the socially committed poetry, her situation as a woman and mother after the birth of a mentally handicapped child pushed her into responding to her urge to write.

Over the years, her poetic expression would become sparer and increasingly refined. Themes like love, loneliness, the passing of time and poetic creation acquire in her poetry an incisive and personal touch, recalling the best of the twentieth-century English-language women writers.’

This quotation is the introduction to Abelló’s page Who I Am and Why I Write, where she tells more about her life and work.

‘Her poetry is characterized by short, free verses and motors of articulatory rhythm which have a harmonic structure. It flows naturally without getting trapped in the usual trivial anecdotes that often imprison verses. This allows her to explore an extended range of feelings, hence the broad titles of her poems’ (Visat). In her verses you recognize universal feelings, so that she appeals to a wide public.

Apart from being a poet, she also translated poetry, her own as well as verses of  Sylvia Plath, Anne Sextion and Adrienne Rich.

Read some English translations of her poems on PoemHunter.